Although the calendar says fall, the temps still stay feel like summer.  Brisket prices have finally comes back to earth, and I was able to purchase this brisket for just under $26 from my local GFS paying $2.49/lb. I did trim some of the hard fat off of the brisket which removed about 1.5 lbs from the initial total weight. 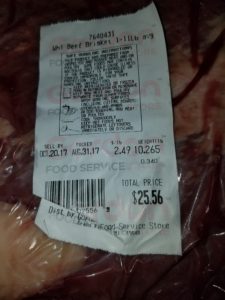 As usual, I prefer to smoke these overnight. I started the smoker about 7:45 pm and I used the minion method. This method calls for filling the chamber about 1/2 way with unlit charcoal. I then added hickory wood chunks, and then filled the chamber with more unlit charcoal. I added about 30 unlit to the chimney starter and waited until they were fully lit. I then poured the lit on the unlit and added some more wood, cherry, this time to ensure that it would get immediate smoke. I filled the water pan and then added the brisket. There is a lot of debate about fat up or fat down, and on this one I went with fat up. 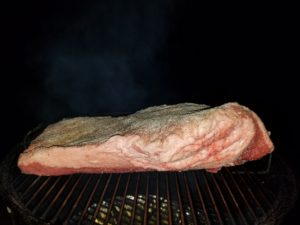 I then monitored the temp and when it was stabilized between 225 and 250, I went to bed. When smoking brisket, I do not do anything special, I put it on and pull it off when it is done. I do not baste it, I do not spritz it, and I do not wrap it until it has reached it finished temp. I checked it in the morning and probed it, and it was about 190, but needed to go to 203 (my personal preferred finished temp). I walked the dogs and walked 9 holes and when I returned it was complete. Total cook time was 13 hours. 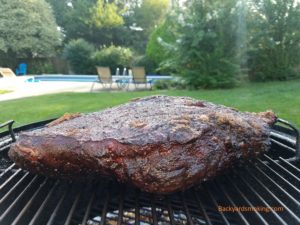 The cook time and temp is important, but you want to be able to rest the brisket after smoking it. I removed it and double wrapped in foil and then placed in a cooler with towels. I allowed it to rest for 2.5 hours before slicing (mainly based on when I wanted to eat, I have held them up to 6 hours using this method). With a whole packer, there are two different sections, the flat and the point ( I prefer the point, it has more fat content ). I separated the two and sliced the point first. 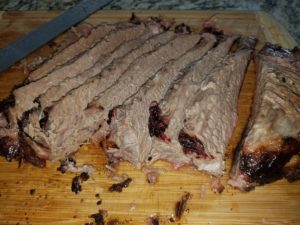 And here is the flat added to the point. Flat was good, but the point was the bomb… 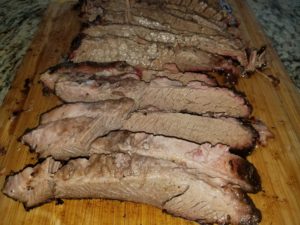