This was the my first smoke hanging ribs with the rack I received for my birthday. The concept of the rack is to turn a Weber Smokey Mountain into a pit barrel style cooker. The rack could be used to smoke ribs or chicken, or pork belly to be used for bacon.  The concept is the same when starting the smoker, using about 1/2 of a chamber of charcoal lit in the chimney. I covered the bottom ring with a layer of a couple deep and then tossed the lit coals in the middle and add two chunks of hickory and one chunk of cherry. To set this up, both cooking grates as well as the water pan is removed and the meat is smoked directly over the hot coals. This is completely different than the normal setup when the dripping are either caught in the water pan or in the dry pan. The difference is supposed to be that the drippings from the meat drop onto the coals that then adds to the smoke that is helping cook the ribs. 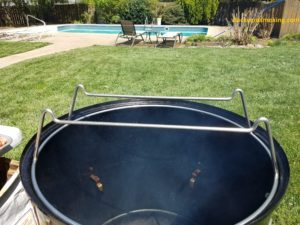 For the smoke, I went with St Louis style ribs that were purchased on sale for $1.99 / lb. They were nice meaty racks of ribs and were only $7 a piece. I seasoned them a couple of hours in advance to give the rub a chance to sink in. I got the smoker going and then put the hooks a couple of ribs deep in the three racks and hung them in the smoker and monitored until the temp was 225. At that point I choked down the air input to the hold the temp. Top vent open, 2 of the 3 bottom vents open a 1/4 turn.

I read up on this cooking method and most cooks included basting, so I planned to spray the ribs with apple juice about once an hour during the smoke. I also planned to manually rotate the rack about a 1/4 turn when spraying them. The first thing I noticed was the aroma from the smoker was different, and was really great. Normally when smoking I have always primarily noticed the smell of the type of wood I am using. In this method, I could smell the ribs more strongly than the wood I was using.  I sprayed and rotated repeatedly through the 4 1/2 hours I was smoking the ribs.  A couple of hours into the process, I added a small chicken to the party. I spatccocked the chicken  (removing the back portion, and seasoned and hung it in the smoker. 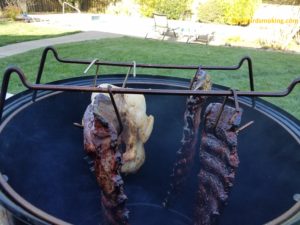 Everything that I read, stated the ribs would cook quicker when smoked using this method. At the 4 hour mark, I removed two of the racks and applied some barbecue sauce. 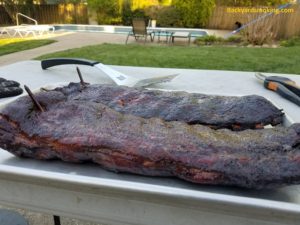 I left the ribs in for another 30 minutes and then removed them, and left the chicken cooking. 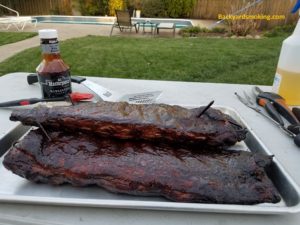 The chicken smoked for a total of 2 hours and turn out good and look neat hanging in the smoker. 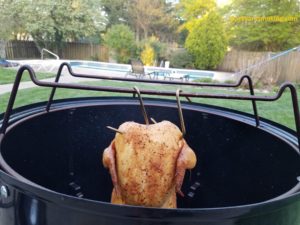 I covered them in foil and let them rest for while before slicing. 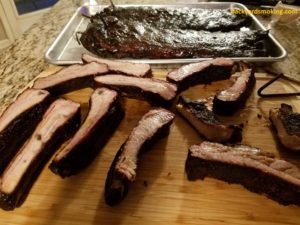 The flavor and aroma was outstanding with the ribs, better than anything I have prepare in years of smoking. The only down side was they were not quite cooked long enough, and really need a little more time. Believe me, we ate them anyway, they were just not fall off the bone. 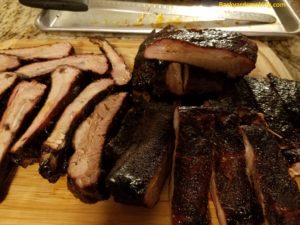