It was a washout of a weekend so instead of smoking something, I did a long Sous Vide cook. I purchased a large thick Chuck Roast, over 5 pounds. I did do a light sear prior to the Sous Vide and then seasoned with salt, pepper and garlic powder. I then vacuum sealed it , and placed it in the cooler with the Anova Sous Vide and set it for 131 degrees.  I planned to let this go for 48 hours. I have previously looked at some of the over priced containers for Sous Vide cooking and purchased this Coleman Party Stacker Cooler. The cooler works great, helps maintain temp and minimize evaporation during the cook. I had to cut a notch in the top lid to allow the Sous Vide proper access, 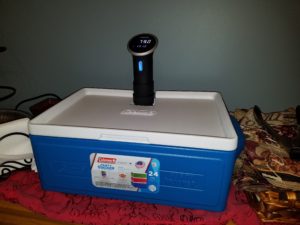 This what it looked like coming when I removed it after 48 hours. The bag was filled with liquid from the cook that I turned into gravy. 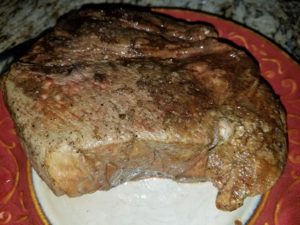 I then seared it in my cast iron pan. I normally do this outside with great success, but since it was raining, I was forced to do it on the stove top. I heated the pan until it was smoking and then added a small pad of butter to the pan and dropped the roast in. The range top fan was working overtime with the smoke that was produced. For the sear to take, you need to make sure the meat is dry and the pan is hot. 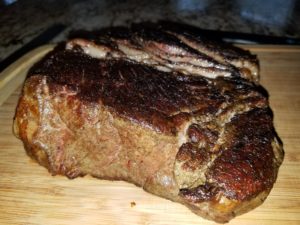 It took about 5 minutes to complete the sear and then I let it rest before I carved it with my slicing knife. 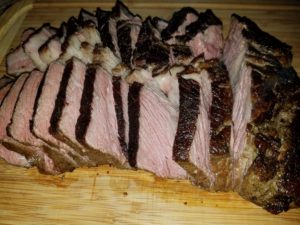